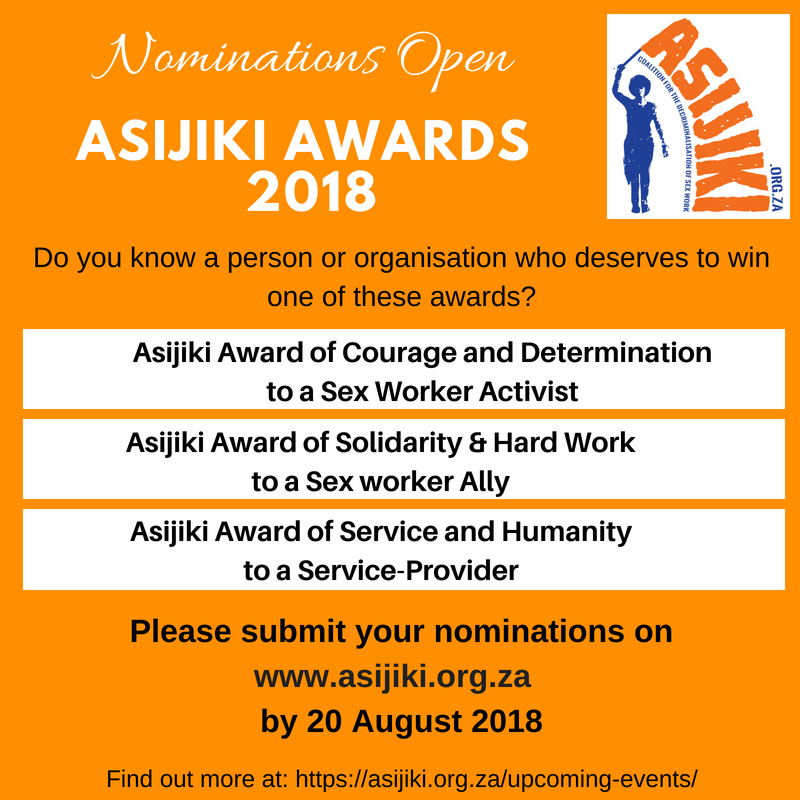 NOMINATE YOUR HERO FOR AN ASIJIKI AWARD

In 2016, the ‘Asijiki Coalition for the Decriminalisation of Sex Work in South Africa’ initiated the Asijiki Award for Courage and Initiative that was handed to Sir Elton John at the International AIDS Conference in Durban. The award highlighted the efforts of Elton John in recognising the human rights of sex workers, and supporting the removal of the criminal law from sex work.

In 2017, we expanded the range of awards to celebrate the hard work, courage and dedication of sex worker activists, providers of services to sex workers, and sex worker allies. An Awards Evening was held during the Asijiki Annual General Meeting (AGM) on 13-14 September 2017, where three prize-winners were presented with their awards. The prize-winners will be flown to Cape Town and accommodated in a comfortable hotel with a spa voucher.

Please complete this form [https://docs.google.com/forms/d/e/1FAIpQLSf4pTbVpiqSD01kuCBjmCHOEpksV2JICcvFDNtE8THFzn6y6A/viewform?fbzx=6056612244893750000] in order to formally nominate someone for one of the following three Asijiki awards for 2018.